Last week the hospitality world lost one of its more colorful characters: Ace Hotel co-founder Alex Calderwood. What follows below is a recollection from Tablet Hotels Magazine editor-in-chief John Speranza and a 2009 interview with Alex.

Traveling as much as I do, I appreciate the times when I can stay at a hotel that is as much comfortable and gracious as it is inspiring and fun. The Ace never disappoints on that front. Hotels, when done well, are 'cultural catalysts' as he describes and an integral part of the travel experience.

Alex's description of jumping into their first project with their entrepreneurial naiveté is also very inspiring and I think an undervalued but critical ingredient in successful start-ups. Not knowing what you're not supposed to do ( as scary as it can be) allows one to to cut new trails and forge ahead. Maybe courage at those times is really just naive passion, but sometimes you just have to follow your gut.  Thank you Alex + crew! 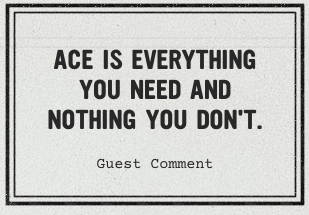 John Speranza, Tablet editor-in-chief:
'I met him only once, over coffee in a booth at the converted Denny’s diner in the newly opened Ace Hotel & Swim Club, in the course of an interview for the Tablet magazine. We talked about a lot of things, including the then-soon-to-open Ace Hotel New York and the particular appeal of Palm Springs for a Seattleite in the depths of a sunless winter.
Since then I’ve stayed at the Ace in New York at least a dozen times, and I’ve even moved to Seattle and experienced those sunless winters first-hand. But what stuck with me most about our conversation was Alex’s simple and sincere statement of the Ace philosophy, the humble and generous sentiment that is, for us here at Tablet, the key to the Ace hotels’ special resonance, and the reason the hotel world will be poorer for his absence.
From the 2009 interview:
It seems to me you’re just trying to do what you, personally, want to see in a hotel.
That’s a good interpretation, actually. So much of what we do is just led by gut instinct. Just what feels right. There’s not a lot of artifice or a lot of calculated measures to get a certain clientele, it kind of just is us. Like-minded attracts like-minded.
Even when we talk internally, even the sales team, it’s not about selling for us, it’s about sharing. In that respect you’re coming from a different intention. I think that is reflected throughout the property, throughout the staff and so on. You’re just sharing an experience, and sharing things that we think are interesting, and people that we think are interesting.

What was it that made you want to get into hotels in the first place?
I think we’ve always seen ourselves more as entrepreneurs than hoteliers per se. We were in Seattle, we traveled a lot and really enjoyed hotels, and the experience of travel. So that was on our mind. And a hotel project came available to us. But we never looked at it as doing more than that. We jumped in very naively, just jumped in with both feet. I think our naivety actually was a benefit, in a way, because we just approached it the way we would approach it. We didn’t think about what’s conventional or unconventional.
What I find inspiring now is that hotels are a very interesting vessel, a container, almost, where a lot of interaction can happen. The actual selling of a room is just a transaction, but it’s a point of bringing people together. I think what’s more important to us is all the other things: creating the experience, creating what I like to call a cultural catalyst or a moment to interact. It hits all the senses, and it’s all about people, and it’s all about sharing, and it’s all about a hospitable way of moving through the world with grace.'
labels // design inspiration, travel