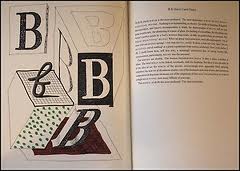 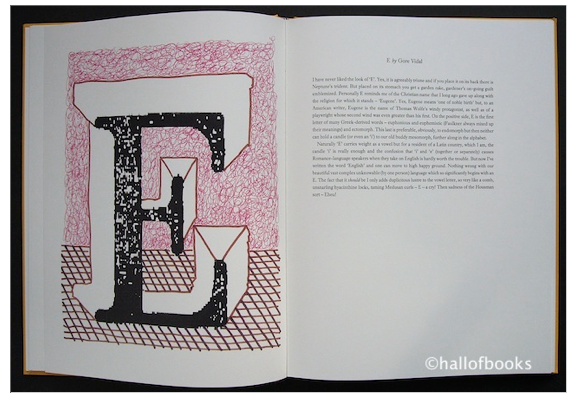 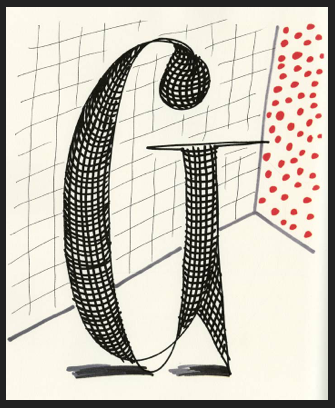 I'm still in an arty frame of mind from all the shows we've seen in NYC recently. In addition to the amazing work there, we also found quite a few tempting art books.  My apartment is exploding with books at the moment, (honestly, a serious addiction that has gotten out of hand)  so I was trying to exercise a little restraint and didn't buy any. But, there's one particular book that's been haunting me since our trip to LA: Hockney's Alphabet, that I saw at LEADAPRON.

This is no ordinary ABC book; it includes Hockney's letter illustrations, and the definitions of each letter by twenty-six illustrious writers including Susan Sontag, Pulitzer Prize-winners Norman Mailer, Arthur Miller, John Updike, Booker Prize-winners Ian McEwan and Kazuo Ishiguro as well as Nobel Prize-winners William Golding and Seamus Heaney, just to name a few. It was published in London, by Faber and Faber in 1991 as a fundraising effort for the Aids Crisis Trust. Two limited editions were also published, with 300 copies of the deluxe version signed by Hockney and Scott Spender (acclaimed writer and the project's editor) as well as most of the featured writers.

I'm not sure what I'm fixated on more, Hockney's book or LEADAPRON?!  Like Hockney's book, this is no ordinary bookstore. We were introduced to Jonathan Brown, the owner of LEADAPRON, by Rene Holguin of RTH; Rene said if we only went to one place in LA we had to meet Jonathan and see his new home. And it is literally just that, a new home. Jonathan was kind enough to give us a quick tour of the space, a beautifully remodeled and adeptly re-purposed West Hollywood home and now a rare book store and gallery. The result is an inviting blank canvas that shows off his impressive collection of first editions and limited monographs by contemporary artists and photographers. It's flooded with light and the original garage has been deftly converted into a cozy library space. I could easily spend an afternoon getting lost in the books here.

The best parts of traveling, like in life, are the people you meet and meeting Jonathan and Rene were definitely highlights of our LA trip. For more behind the scenes stories about Jonathan and  LEADAPRON (and where that name came from), check out a great interview by David John of DISC Interiors, shot at Jonathan's previous location. Also, this interview last year in SF Art Quarterly.

p.s. LEADAPRON's Hockney book has since been sold and I am now officially on the hunt. I hope I haven't ruined my chances by posting here. Let's keep this entre nous.

some of the photography by Marco Annunziata and David John
labels // art/photography, travel